As a major Miami Dolphins fan, Neal Fusco never gives up hope for his team even in challenging times. This past Monday night, he was not disappointed as the Miami Dolphins took on their long time rivals and Super Bowl Champions, the New England Patriots. 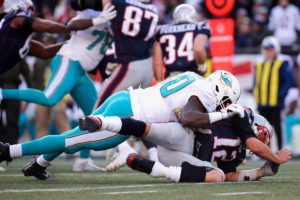 The Miami Dolphins headed into Monday’s game against the Patriots in a nearly must win situation to keep dwindling playoff hopes alive. After starting the season 4-2 and giving fans reasons to believe in a post season push, the Dolphins lost five straight before beating the Broncos.

Miami started strong, playing as if this game was their Super Bowl, and in many ways it was. Holding the fierce New England attack without a point in the first quarter, the Dolphins went ahead 6-0 on two Cody Parkey field goals.

The Patriots took the lead on a 5-yard touchdown run by Rex Burkhead, but that was short lived.  Miami culminated a seven-play, 80-yard drive with a touchdown pass from Jay Cutler to Jarvis Landry.  A field goal by Stephen Gostkowski at the end of the half cut the lead to 13-10.

The Dolphins dominated in the third quarter, holding New England without a score and piling on two touchdowns of their own. Cutler, playing at a Pro Bowl level on Monday night, found Jakeem Grant for a 25-yard touchdown and Landry again from 4 yards out. After three, Miami was up 27-10 and were one quarter away from possibly saving the season.

In typical New England fashion, they were not about to roll over. A six-play, 53-yard drive ended in a Tom Brady touchdown pass to James White. The Dolphins were unable to add to the lead and the Patriots came within seven with a Gostkowski field goal with under a minute to play.

After an unsuccessful onside kick, the Dolphins and Neal Fusco breathed a sigh of relief, pulling off the upset to move to 6-7 on the season. They are a tied with the Raiders and a game behind Kansas City, Buffalo, Baltimore and the Chargers for the final playoff spot.

Cutler threw for 263 yards and three touchdowns, while Miami’s defense held Brady to  just 233 yards, a touchdown and two interceptions. New England managed just 25 yards on 10 carries on the ground. On the flip side, Kenyan Drake shredded the Patriots for 114 yards on the ground.

If this week was their Super Bowl, next week is another one as the Dolphins take on the 7-6 Bills in attempts to keep their playoff hopes alive.

Connect with Neal Fusco on Twitter for more talk on sports and the Miami Dolphins and stay tuned for his next blog.